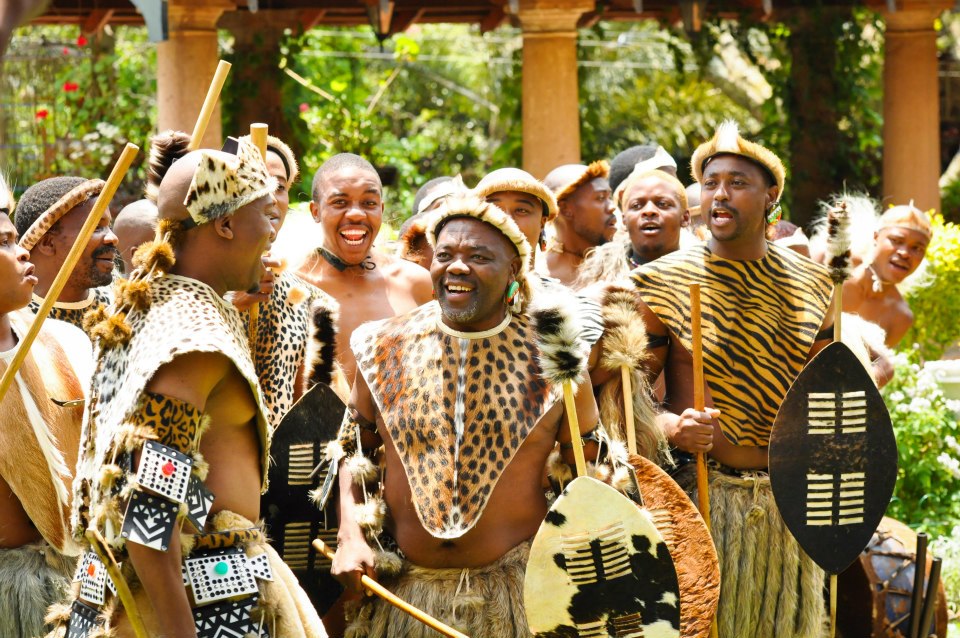 Synopsis of the Zulu People of South Africa

In the pristine land of South Africa lives the remarkable Zulu people who are majorly located in the Kwa-Zulu Natal. The name of this tribe of people is “AmaZulu”,  which translates to mean “people of heaven”.

The Zulu culture and traditions are a significant part of the historical tapestry of South Africa as the largest ethnic group in that region. This ethnic group has an estimated population of up to 10 million residents who speak the native language called IsiZulu.

The Zulu people, believed to descend from a chief from the Congo area, have their roots traced back in time to the Nguni community which migrated southwards along the East Coast from Central Africa in the 16th century.

Finally settling in what was to become the Kwa-Zulu Natal, they merged with the local communicates there to form a part of an ethnic group called the Bantus. This was how the Zulu people settled into what is now considered their homeland.

Today, various ethnic groups across Africa and even foreigners from India and Europe have made a home for themselves in this region.  The Zulu people have themselves spread to live in many other regions such as Zambia, Zimbabwe, and Tanzania.

However, the Kwa-Zulu Natal remains primarily the home of the Zulu people. Thus, this comprehensive guide explores Zulu culture and traditions.

History of the Zulu People

The nation of the Zulu people was itself formed by a phenomenal military leader called Shaka, the third son of Senzangakhona, who came into power after his father’s death in 1816. The Zulu clan was at the time a small one consisting of no more than 1,500 people. It was under Shaka’s leadership that the clan grew in size and strength.

He conquered and amalgamated several nations under his rule and many of Zulu’s military tactics and weapons such as the lethal  ‘Assegai’ were created by him.

After the death of Shaka’s mother, Nandi, he had a mental breakdown and became a threat that caused the death of hundreds of his people. He was eventually assassinated by the lesser chiefs and his half-brothers – Dingaan and Mhlangana. Although, his half brothers also succeeded him after the assassination.

To date, Shaka’s impact is still significant and remembered because the customs and traditions of his time are still at the very core of the Zulu people. Their annual “Heritage Day” celebration commemorates Shaka’s impact and revives the people’s traditions.

The revolutionary contributions of the Zulu tribe to the history, development and cultural dominance of South Africa have resulted in it being considered the very soul of the nation. Zulu villages were handed over to the British during the 17th and 18th centuries.

They resisted this colonization for several years because they did not want to be under British rule when they had solid patriarchal village government systems. As a result, war erupted between the British and the Zulu. In the 19th century, the Zulu people singularly accomplished incredible military exploits in their war against British supremacy.

The culture of the Zulu people, which they take so much pride in, is as interesting as their history and origin. Their heritage is distinctive, although it is closely linked to that of the Swazi and Xhos tribes. They believe in a god called “Nkulunkulu” who does not interact directly with mortals or have an interest in the daily activities of humans.

Their interaction with the otherworldly powers or entities is with the spirits who they can only access through their ancestors. One of the unique Zulu cultures and traditions is that the people have great beliefs in ancestral spirits known as amadlozi and abaphansi.

To interact with the ancestors, they must make use of divination. As a result of their high belief in the supernatural and spiritual, the Zulu people are not inclined to ascribe the origin of any misfortune to natural causes.

Instead, they consider it to be caused by evil sorcery or offended spirits who they must appease. The ancestors appear to the people in form of snakes, dreams and sickness. Offerings and sacrifices are common means the Zulu Tribe connect with their gods.

The Zulus subscribe to the belief that life does not end with death. Just like other cultures, they have a strong belief that life continues in the third realm (spiritual world). Any Zulu that dies, must be buried in line with the traditional mode, else if done otherwise, the spirit of the deceased will be wandering.

The Zulus also hold firmly the belief that the deceased must be buried with his personal belongings to ease their journey in the spiritual world. That is another incredible phase of the Zulu culture and traditions.

Umndeni is the Zulu term for family and it refers to people related to one another either by blood, adoption or marriage. In the family structures of the Zulu people, men take on a dominant role because they are charged with caring for the cattle and providing for the needs of their wives and members of the family.

Women, on the other hand, cater to the children and the hearth. Their women have considerable economic influence within the family and own the family house. It is part of the Zulu culture and traditions that women do most, if not all, of the planting and harvesting.

As a mark of pride in their warfare ability, men have a tradition of sitting on a hide or the shield. Young boys who aspire to be brave warriors are introduced to the heritage by being trained to fight with sticks.

Like other ancient culture, the Zulu culture and traditions permits an exogamous marriage, that is marriage outside of a specific group especially as required by custom or law. But where marriage is between persons in the same clan, it is forbidden. If it happens, a ritual called ukudabula must be performed.

Attires and adornments of the Zulu people are unique and creative. Many aspects of their dressing hold symbolic meaning which anyone who hopes to visit or meet them should be aware of. As a practice of Zulu culture and traditions, what is worn by a Zulu woman is determined by and used to communicate her marital status.

While engaged and married Zulu women cover up their chests and bodies to indicate that they are taken and to communicate respect for their in-laws and partners.

Single and eligible Zulu women take pride in flaunting their feminine bodies. Their chests are exposed but they cover their genital area and part of their lower bodies with skirts made out of beaded cotton strings or grass.

The men traditionally put on a warrior’s headband called “umqhele”, “amambatha” as covering for their shoulders, “umcedo” which acts like underwear to cover the genitalia, “ibheshu” around their waists like trousers and finally, footwear called “imbadada”.

The Zulus are known for raring cattle and agriculture. Their meal largely consists of dairy (cow) and agricultural products like vegetables, fruits, corn flour, boiled meat, barbecued, amasi and amadumbe. Amazi also called fermented milk or curdled milk is one major traditional delicacy of the Zulu tribe. Using a gourd, the milk is left to form curds.

The Zulu people uphold the belief that Amazi makes men strong and stir digestion. Many of them even describe the taste as a mixture of plain yoghurt and cottage cheese.

Also, the Zulu bear is another vital source of nutrition. As an ancient part of the Zulu culture and traditions, the drinking of beer is very significant on most of the Zulus’ occasions. Zulu women carry out the beer brewing process, which is part of their duties. This is a three-day process.

On the first day, the maize and sorghum are soaked in water. On the second day, the soaked content is boiled and set aside to cool off. On the third day, the beer is brewed through sieving for consumption. Maize, potatoes, yam, and pumpkin are specific ingredients used in Zulu traditional foods.

More on Zulu Culture and Tradition

A major aspect of the Zulu culture and traditions is bead-making and basketry. The Zulu people are renowned for their brightly coloured baskets and beads. They also have been recognized for the small carvings and figural sculptures they create. Like their attires, their beads are used as a form of symbolism.

Different colour codes comprising seven colours and varying shapes represent different meanings. With colours, the aim is often to symbolize emotions, status and spirituality, while shapes signify one’s marital status. Also, one would find that chanting, drumming and dancing are fundamental parts of celebrations by the Zulu people. For instance, the ingungu drum is played when a young girl sees her first menstruation.

As an aged part of Zulu culture and traditions, there are quite a good number of dances that celebrate different purposes. One of such dances is the hunting dance which celebrates the bravery and boldness of hunting.

This dance follows the pattern of movement of hunters. The dance is usually performed before men go hunting. Another is the dance of small shield. This rhythmic dance inspires military unity and it is performed before warriors go out for war and on royal occasions.

Needless to say, the Zulu culture and traditions are incredible. The people have a vast and deep cultural heritage that is unique to their culture and societal norms.

Leave a comment below letting us know what culture you want to read up on next. Remember that iVoiceAfrica is your go-to for anything and everything African-related.